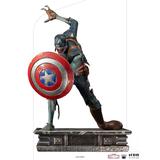 Dragging its left leg because of its fractured ankle, the decrepit creature once known as the First Avenger walks forward on the metal floor of a train car, hungry and in search of its next prey. Even reduced to growling like a primal predator, this creature is still dangerous and lethal thanks to the fighting instinct and Super Soldier serum that still remains within him. Even as a zombie, the creature still knows how to use its legendary shield. Sideshow and Iron Studios present the "Zombie Captain America 1:10 Art Scale Statue," derived from the Marvel Studios animated series What If...? on the Disney+ streaming service.

What If...? is the fourth MCU television series. It explores how the Marvel Universe might have unfolded if, at certain key moments in its history, something had happened different. Narrated by the cosmic being known as The Watcher, each episode refers to an alternate reality within the Multiverse. The fifth episode of the series called "What If... Zombies!?" features a group of surviving heroes who face a zombie apocalypse caused by Dr. Hank Pym.

After traveling to the Quantum Realm in search of his lost wife, Dr. Hank Pym meets Janet van Dyne, who, in this reality, has contracted a quantum virus that has corrupted her brain and turned her into a cannibalistic undead creature. She then infects Pym, who upon returning to his reality, spreads the virus around the world. The series stars characters such as Bruce Banner (Hulk), Bucky Barnes (Winter Soldier), Happy Hogan, Sharon Carter, Okoye, and Kurt (former partner of Scott Lang on robberies). One of the most iconic moments of the episode is Bucky's confrontation with his old friend and partner, Steve Rogers, in the form of Zombie Captain America, in a train car.